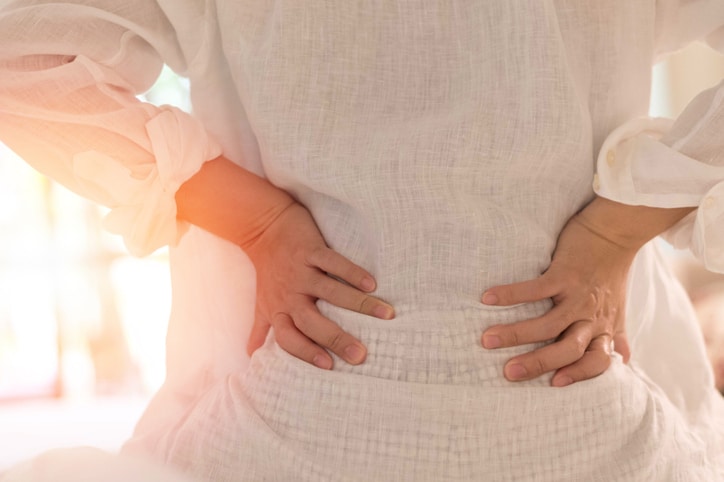 During pregnancy, women often experience a large range of symptoms affecting their daily lives. A common issue that almost 50% of pregnant women face is back or pelvic pain1. Katonis et al. (2011) describes how since the era of Hippocrates, women have been reporting this issue during pregnancy1. Typically, back and pelvic pain in pregnant women arises due to weight gain causing a postural shift that increases stress on some parts of the body2. This pain can extend postpartum, causing more long-term effects; however, these effects can be reduced through early intervention and therapies1. Treatments may include physical therapy, yoga, acupuncture or pharmacological medication2. Physical therapy is a fairly common treatment for this type of pain, and if it is started early in pregnant women, even before any symptoms of pain, the treatment has the potential to reduce the risk of developing severe back or pelvic pain1.

Kinser et al. (2017) recently conducted a systematic review of nonpharmacological treatments available for back and pelvic pain in pregnant women3. Looking mainly at physical therapy and yoga through fifteen different studies, the researchers concluded that these two therapies are promising for pain reduction during pregnancy, as well as in reducing depression and stress3. However, Kinser et al. (2017) were unable to come to a strong conclusion about this because much of the current literature is heterogeneous, making it difficult to conduct systematic comparisons3. More standardized literature on this topic is necessary to reduce the gaps in knowledge, especially because physical therapy shows a lot of promise3.

Benten et al. (2014), on the other hand, found more positive support for using physical therapy in reducing back and pelvic pain during pregnancy4. Examining twenty two randomized controlled trials focused solely on physiotherapeutic interventions, the researchers found that in cases where patients were provided exercise therapy along with detailed patient education, there was a significant decrease in pelvic pain4. In addition, the researchers noted that sick leave also decreased when pregnant women were recommended exercise therapy4. Similarly, a review in the Journal of Orthopaedic & Sports Physical Therapy provides supporting evidence for physical therapy during pregnancy5. The authors provide a detailed overview of the benefits of physical therapy by discussing specific exercises that are useful in back and pelvic pain reduction, specifically in the long-term, as at least a third of pregnant women continue to experience this pain one year postpartum5. In particular, the authors note that muscle strengthening exercises that activate the spine or pelvis are especially beneficial in comparison to other therapies5. Water-based therapies like water aerobics are also said to have a positive effect on pain, but there is varied literature on this specific exercise1,4,5.

There is clearly some promising evidence that physical therapy can reduce pelvic and back pain during pregnancy. However, a lot of the literature is heterogeneous in that the methodologies and the types of therapies differ, making it difficult to compare therapies and draw strong conclusions. Research investigating specific exercises are thus necessary in order to make strong recommendations for dealing with back and pelvic pain during pregnancy.

(5) Pregnancy and Low Back Pain: Physical Therapy Can Reduce Back and Pelvic